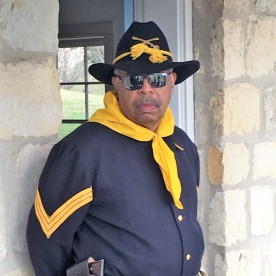 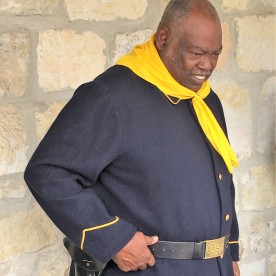 In honor of Black History Month I thought it appropriate to revisit the history and legacy of the Buffalo Soldiers (see my post, Top Soldier, November 24, 2017.)

These all-black units were formed in the aftermath of the Civil War and served at posts stretching from the Texas frontier to the Dakota territories performing duties that included improving the nation’s infrastructure (the building of forts, roads, and telegraph lines), acting as rangers within our national parks, and participating in the Indian Wars.

Native Americans originated the name. Its derivation has been attributed to their comparison of the soldiers’ hair to the hide of a buffalo, but it also reflects their admiration for their courage in battle.

The Indian Wars ended in the 1890’s with the capitulation of the Apache, however, the Buffalo Soldiers also fought in the Spanish-American War and in the Philippines. During World War I their duties were limited to patrolling the border with Mexico, and they did not see any action during World War II.

Military segregation came to an end in 1948 and the last all-black units were disbanded in the 1950’s. Today associations such as the Bexar County Buffalo Soldiers Association proudly carry on that heritage by dedicating themselves to the preservation of the Buffalo Soldiers’ history through educational programs and historical reenactments that inform the general public about their extraordinary record of accomplishments.

I dedicated chapters of my book on westward expansion, Palo Duro, to their legacy. They are only now receiving the recognition that they so justly deserve.