Set in the year 885, this is the continuing story of Uhtred of Bebbanburg and the Saxon Tales. Like its predecessors this fourth entry into the series offers vivid and dramatic battle scenes, but the violence (while true to this period in history) does not overshadow well drawn characters – both historical and fictional – that add depth and human interest to the origins of modern day England.

Following the defeat of the Viking Guthrum, Alfred the Great is looking to consolidate his rule over all the kingdoms (not just Wessex but Mercia, East Anglia, and Northumbria) and bring Christianity to the whole country. To do so he must protect his borders from further Viking raids and Uhtred is sworn to aid him in this effort.

When Sigefrid and Erik Thurgilson capture and occupy London, Alfred’s control of the Thames River is threatened. Now Uhtred must weigh his oath to Alfred against his own ambitions. A mixture of both Saxon and Dane, Uhtred has divided loyalties that will be tested by predictions that he will be king of Mercia if he allies himself with the Vikings.

Bernard Cornwell engages the reader in the narrative of shifting allegiances and power struggles. Alfred’s treacherous nephew, Aethelwold, covets the throne upon which Alfred sits and schemes with the Danes to lure Uhtred away from his oath to the king. News of a risen dead man foretells Uhtred’s kingship in the kingdom of Mercia. However, the vain and abusive Aethelred, married to Alfred’s eldest daughter, has already been promised the kingdom. His cruelty endangers his wife Ethelflaed, while his vanity and lack of leadership jeopardizes the campaign to recapture London. Uhtred must find a way to protect Ethelflaed from Aethelred, reveal Aetholwold’s treachery, and recapture London to fulfill his pledge to Alfred.

Sword Song is an apt title for the book as Uhtred again wields his sword Serpent-Breath in the battle for London. For anyone unfamiliar with Uhtred’s previous adventures please refer to my reviews of the three earlier books in the series: The Last Kingdom, Dec 7 2018; The Pale Horsemen, Jul 5, 2019; and The Lords of the North, Feb 26, 2020.

A united England in the ninth century is still just a dream, and there are many more adventures yet to be told. In total, Bernard Cornwell has written twelve books in this ongoing series with more to come! Some readers may find this disconcerting, but whenever I’m in the mood for rousing descriptions of battle and a rich history of the northward expansion that resulted in the realization of Alfred the Great’s dream, I find myself returning to the Saxon Tales.

Next up for me, somewhere down the road… The Burning Land.

The Lords of the North is book three of Bernard Cornwell’s Saxon Tales, continuing the story of Uhtred Ragnarson and the founding of a United Britain under Alfred the Great. For the background on the first two entries in the series see my previous reviews for The Last Kingdom (Dec 7, 2018) and The Pale Horseman (Jul 5, 2019.)

The year is 878 A.D., and Alfred has just defeated the Viking Guthrum at the Battle of Ethandun with Uhtred’s assistance, thus allowing him to consolidate power in the Kingdom of Wessex. However, Alfred is a sickly king and has yet to strengthen sufficiently to take on the Danes in the northeastern half of England where three lords, all sworn enemies of Uhtred, rule:

In Northumbria there is Ivarr Ivarson, whose brother Ubba was slain at the hand of Uhtred. In the Valley of the River Wiire there is Kjartan the Cruel and his son Sven the One-Eyed. Kjartan is responsible for the murder of Uhtred’s adopted father Ragnar, and has imprisoned his stepsister Thyra in the formidable fortress at Dunholm and given her over to Sven to sexually abuse. And at Bebbanburg, Uhtred’s birthright, his uncle AElfric has usurped his heritage and seeks Uhtred’s death to ensure that he can hold onto his  lands and title.

Released from his pledge to Alfred, Uhtred sets out to confront his enemies and reclaim his heritage setting in motion a series of adventures that include betrayal, slavery, political intrigue, and monumental battles… all of which make for a thrilling and entertaining read. Bernard Cornwell is at his best in this third installment, writing vivid descriptions of life and death in ninth century England and the collision of two worlds and cultures – Saxon Christianity against Pagan beliefs and mythology.

This confrontation occurs not just on the battlefield. The internal struggle for men’s souls is a continuing theme in all the books, juxtaposing faith in God the Father and his only begotten Son Jesus and the concepts of sin and redemption, heaven and hell with the belief in multiple Norse gods, Valhalla, mythical beings and superstition. One the one hand there is Alfred the Great, a devout Christian and the pious ruler of what will become Great Britain, and on the other Uhtred, a Viking warrior who totally believes in fate and destiny.  Their ongoing relationship and need for one another will play out as Bernard Cornwell continues his history of England in his next entry in the series, Sword Song.

Lest anyone think otherwise, however, each of these books can be read by itself as a stand-alone fantasy adventure that mixes sword and sorcery with accurate depictions of this historical period. The continuity lies in Uhtred.  The point of view is his and the first person narrative is that of an old man looking back on his life, retelling his tale with both humor and heartbreaking honesty. The dialogue can be crude, the descriptions of battle graphic, but the story is one that draws you in… you actually care about the characters, particularly Uhtred, and you want to know what happens next.

It is also a tale which  immerses readers in Norse mythology where the three spinners weave tapestries of everyone’s life before they are even born, predetermining their destiny and even the timing and place of their death. “It is the three spinners who make our lives. They sit at the foot of Yggdrasil [the tree of life] and there they have their jests… because fate cannot be cheated, it governs us, and we are all its slaves.”

Uhtred’s fate is tied to the conquest and unification of England, while mine is linked to finishing this engrossing, educational, and highly satisfying saga by Bernard Cornwell. 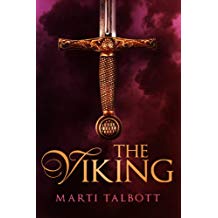 The Viking by Marti Talbot is certainly not what the reader might expect. As a fan of the History Channel television series The Vikings, and the BBC production The Last Kingdom (based on the Bernard Cornwell books), I was looking forward to a saga focused on the Danish conquest of England. I definitely did not anticipate a love story.

The book begins with that promise. Stefan, a young Viking, is looking forward to his first raid alongside his father, Donar. But the foray into Scotland goes terribly wrong resulting in the death of his father, the retreat of the Viking fleet, and young Stefan stranded on Scottish soil.

Able to speak the language because his mother had been a Scot captured on a previous Viking raid, he finds refuge with a woman, Jirvel, and her daughter, Kannak, who are in desperate need of someone to till the land and help them survive. Jirvel’s husband has abandoned them to their fate, but the three bond out of necessity and form a family unit of sorts.

From there the story definitely shifts to the budding romance between Stefan and Kannak. As they grow and mature their filial relationship changes and the two eventually fall in love. However, just as the two realize their true feelings for one another, Stefan is kidnapped and sold into slavery. Stefan never gives up hope of freedom and returning to Kannak, and despite pressure to marry another, she holds onto her dream of a reunion.

In addition to this story of young love, Marti Talbot also writes of Jirvel’s yearning for Laird Macoran who is Kannak’s real father. Many years before, on the eve of their betrothal, war with the rival Clan Brodie threatens. The only way to keep the peace is for Laird Macoran to accept an arranged marriage with Agnes Brodie. It will be a loveless marriage that will also separate Jirvel from Macoran.

The reunion of Stefan and Kannak as well as Jirvel and Laird Macoran closes out the story and sets up Marti Talbot’s follow-on books about future generations. Younger readers will likely enjoy the storybook ending. For the more mature audience the abrupt plot resolution, its innocence, and the dearth of violence that characterized the historical period likely will temper their reaction to it. However, taken as a whole, The Viking is an easy read and enjoyable tale. It may not be anything that you expected, but it can and should be appreciated for what it is.

The Last Kingdom is the first book in a series by Bernard Cornwell on the reign of Alfred the Great, A.D. 871-899. The title refers to the Kingdom of Wessex which was the last to holdout against the Danes after they raided and captured the Anglo-Saxon kingdoms of Northumbria, Mercia, and East Anglia. The Danes sought to colonize what would eventually become England and replace its society with their own to include the worship of the pagan gods Odin and Thor.

The story actually begins in 866 A.D. with the introduction of Uhtred of Bebbanburg who at age ten witnesses the death of his father at the hands of the Danes. The death will initiate a blood feud to regain his title and lands which in the course of time (Book One covers the next ten years) will see Uthred raised by the Danes but ultimately aligned with Alfred.

His allegiance will be tested repeatedly as he tries to reconcile his previous life and religious beliefs with the Viking warrior lifestyle and the promise of Valhalla.  It is a struggle of conscience between the piety of Christianity, belief in a loving God, and a place in heaven versus his predisposition toward the pagan gods, militarism, and the thrill of battle. Participation in Viking raids and fighting in a great shield wall earn prestige and status on earth while also promising an afterlife with endless merrymaking. The Church and priesthood, on the other hand, offer a life of quiet reflection and scholarly pursuits with the hope of saving one’s soul.

Cornwell lets the reader know Uthred’s thoughts and inclinations by relating his tale from the perspective of an old man looking back on his life. The first person narrative combines humor and pathos to capture the significant historical events of the period, the people involved in them, and the savagery of the times. It also firmly establishes the series and subsequent books as must read experiences to know the outcome of Uthred’s story.

One final note, keeping up with the names of places will be a challenge to many readers. Refer to the listing of Anglo-Saxon place names at the beginning of the book for their spelling at the time of Alfred’s reign and their more modern versions. Similarly, character names and relationships can be confusing. Variations of the same name were common. As an example, “Ealdorman AEtheired, son of AEtheired, brother of AEthelwulf, father of AEtheired, and brother to another AEtheired who had been the father of AElswith who was married to Alfred.” Don’t let this dissuade you. It all sorts itself out, or will in the next ten books!